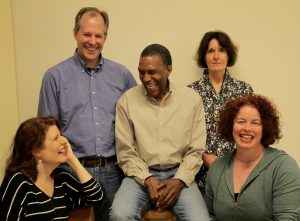 We’ve just finished the first week of rehearsal, and already this family of ordinary, remarkable people is starting to resolve into sharp, funny, unforgettable individuals. 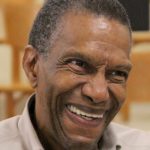 UNCLE BENJAMIN (played by the always charming William Hall, Jr—he played Steve in A Lesson from Aloes) is a retired actor. His dignity and sense of humor are intact, but his memory isn’t what it used to be. 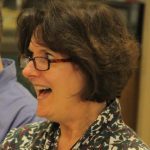 BARBARA, the oldest sister (played by Jeanne Paulsen, who put the Courage in Seattle Shakespeare’s recent Mother Courage). Stretched almost to the breaking point between her teaching (she is the kind of high school English teacher whose students come back to visit, years later) and taking care of Uncle Benjamin.

“Who wants that disgusting fake whipped cream that Marian bought? . . . I think I do.” 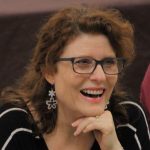 MARIAN (Macall Gordon, Anne in Amazon’s The Man in the High Castle) moved in with Barbara and Benjamin after her recent divorce. Like Barbara, she is a teacher; she’s also a Democratic activist excited about the election who is, nevertheless, also excited about her new boyfriend—a libertarian.

“He’s not a Republican! . . . Anyway, you see people differently, when you sleep with them.” 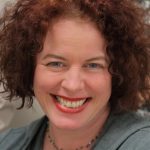 JANE, the youngest sister (the polymath Leslie Law, Sheila in A Day in the Death of Joe Egg) is a struggling writer, searching for a topic for her next book, struggling to decide whether to stay in New York City.

“Ordinary things. How they have meaning. A dinner, a bath.” 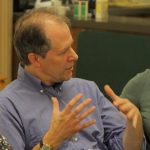 RICHARD, their brother (yours truly) is a corporate lawyer, but he used to work in the New York Attorney General’s office. He’s clearly torn between the idealism of public service and the cynicism of having seen too much sausage made.

“I would have voted for Obama. I think I would have. Does that count for something?”

From the New York Daily News:

“One of the marvels of the Apple plays, each set at a pressing national moment, is how the family marks the huge event as they grapple and go on with their own urgent matters. The big picture illuminates and informs what’s happening close to home and vice versa. . . . SORRY is smart, funny, and unapologetically heartbreaking.” 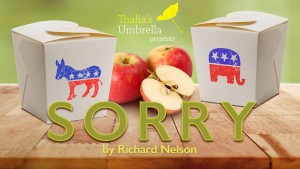