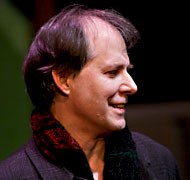 Terry has acted or directed for most of the professional theaters in the Pacific Northwest, including Seattle Repertory Theater, 5th Avenue, and Intiman. After an unsettling role—as a serial killer in Theater 9/12’s A Shade of Green—he was apparently so convincing (check out this review) that no one had the courage to hire him for months after. So he started his own theater.

Terry was one of the seven co-founders of the Seattle Shakespeare Company (he was Doc), and served as a co-artistic director there for six years. He directed the inaugural production of Richard III, and a production of Macbeth starring a pre-Buffy (and pre-British accent) James Marsters.

He has since directed at Theatre 9/12 (The Cherry Orchard), Taproot Theatre (The Clearing), and Seattle Shakespeare again (The Merry Wives of Windsor).

The Seattle Times called his performances as Billy in Billy Bishop Goes to War at the Bathhouse Theater and in Howards End at Book-It as “stellar performances” in their respective years.

His performances with Thalia have included Brian in A Day in the Death of Joe Egg, Piet in A Lesson From Aloes, Richard in Sorry, Carl in The Impossibility of Now, Thyrsis in When Love Speaks, and Jan in Small Mouth Sounds.