It Ain’t Easy to Pick a Play, Part II

It leapt off the shelf and hit him on the head. I swear! I saw it happen. We were strolling innocently through the stacks at the downtown Seattle Public Library discussing Kierkegaard (we’d completely given up on finding a play by then) when the collected Apple Fam 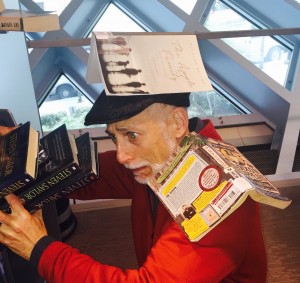 ily plays, by Richard Nelson, leapt off the shelf and dropped onto Daniel’s head.

An intervention by Thalia herself? Did she take pity on our flailing attempts to find the Perfect Play? I’m sure of it! (Amusing, no?)

The Apple Family plays are all lovely. But we immediately fell in love with Sorry. Three adult sisters and their brother (for those of you up on your Chekhov, yes, there are echoes) gather with their uncle to conduct some family business. They sing, they work on a jigsaw puzzle, they eat Chinese food for breakfast. Because it happens to be Election Day 2012, they also argue about politics.  But as Scott Brown said in New York Magazine:

“I’ve been trying to find words to describe what it felt like to be inside . . . as the election raged noisily outside, what it’s like listening to the Apples speak to each other in inside-voices.  It was a lovely, near-religious feeling of shared citizenship, one of the things theater was invented to foster.”

I suspect that, come this June, we’ll all be ready for some “inside voices.”

We’ve assembled a magnificent team of artists: the cast is Jeanne Paulsen (she put the Courage in Seattle Shakespeare’s recent Mother Courage), Leslie Law (Sheila in our Joe Egg), William Hall Jr. (Steve in our A Lesson from Aloes), Macall Gordon (Anne Crain in Amazon’s The Man in the High Castle), and me.  Set and lights are being designed by Roberta Russell (she is a professor at Cornish, and designed the lights for Aloes), costumes by Christine Tschirgi (Constellations at Seattle Rep), sound by Johanna Melamed (Tumbleweed Zephyr for Pork Filled Players), and props by Kelsey Rogers (costumes for Bonnie & Clyde). Our TD isDennis Culpepper (TD at ArtsWest), and the redoubtable Cristine Reynolds is our stage manager. We are delighted and honored to be working with each and every one.

And of course, once he recovers from the concussion, Daniel will direct.

We hope you will join us for what the New York Times called “A rare and radiant mirror  . . .[a] beautiful, deeply cathartic play.”