Bill, this is your third time with A LESSON FROM ALOES, though the first time in Seattle. Why does this play continue to attract you?

It’s so well-written! And it can touch everyone. You think it’s only about a racially-charged situation, but no, it’s about all humanity coming to grips with itself. We’re all kind of like aloes, really, living in the desert of our reality. We take turns as the gardener, and the plant… I think Athol Fugard, the playwright, is like Shakespeare. Shakespeare says everything not once, not twice, but three times, connecting everything back – everyone is connected to every aspect of the overall story; there are no minor characters in Shakespeare, everyone’s story matters for what Shakespeare’s trying to say. The same with Fugard: every character is connected.

This play brings to life the African proverb, “until the lion tells his tale, the hunt will always glorify the hunter.” This play is the other side of the story. 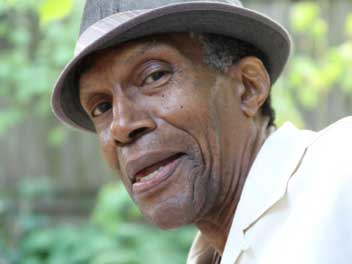 My character, Steve, recites a poem by Longfellow – “The Slave’s Dream” – just after he makes his entrance. I’ve asked myself why Steve chooses that poem to break the ice of a difficult social situation, and why Fugard chooses to have Steve make that choice. Well, it’s because Fugard is making a point, a point that’s connected to the overall story: “they can take you from your home, but they can’t take the home from your heart.”

You came to acting later in life than most people in the profession. What were you doing before you turned to theater?

Oh, I had all kinds of jobs. I worked for seven years in a crisis clinic in Tacoma. Then I worked for VISTA, training VISTA and Peace Corps volunteers, then training the trainers, and did that for all of Region 10 – Washington, Oregon, Idaho and Alaska. But then, people in Congress set out to destroy the program; they did it by defunding training for the volunteers, and shifting program money to junkets for the people on top. I quit in protest.

You play chess. And often with your fellow actor, Terry Edward Moore. Do you have anything to say about your strategy?

Pay attention! Take your time. Chess is all about who makes the first mistake. So, you need to pay attention, you need to be ready to deal with what comes at you. It’s like me, and acting in this play for the third time: if I think I know what’s going to happen, because I’ve done it before, I’ll make a mistake, because it’s never the same with different actors, it’s never the same from rehearsal to rehearsal, performance to performance. I need to pay attention.

How do you approach chess with Terry?

I hope he makes the first mistake.

Terry has acted and/or directed for most of the professional theaters in the Pacific Northwest, including ACT, Seattle Repertory Theatre, 5th Avenue, and Intiman, and from coast to coast. After an unsettling recent role—as a serial killer in A Shade of Green at Theatre 9/12—he was apparently so convincing (check out this review) that no one had the courage to hire him for months after. So he decided to start his own theater.